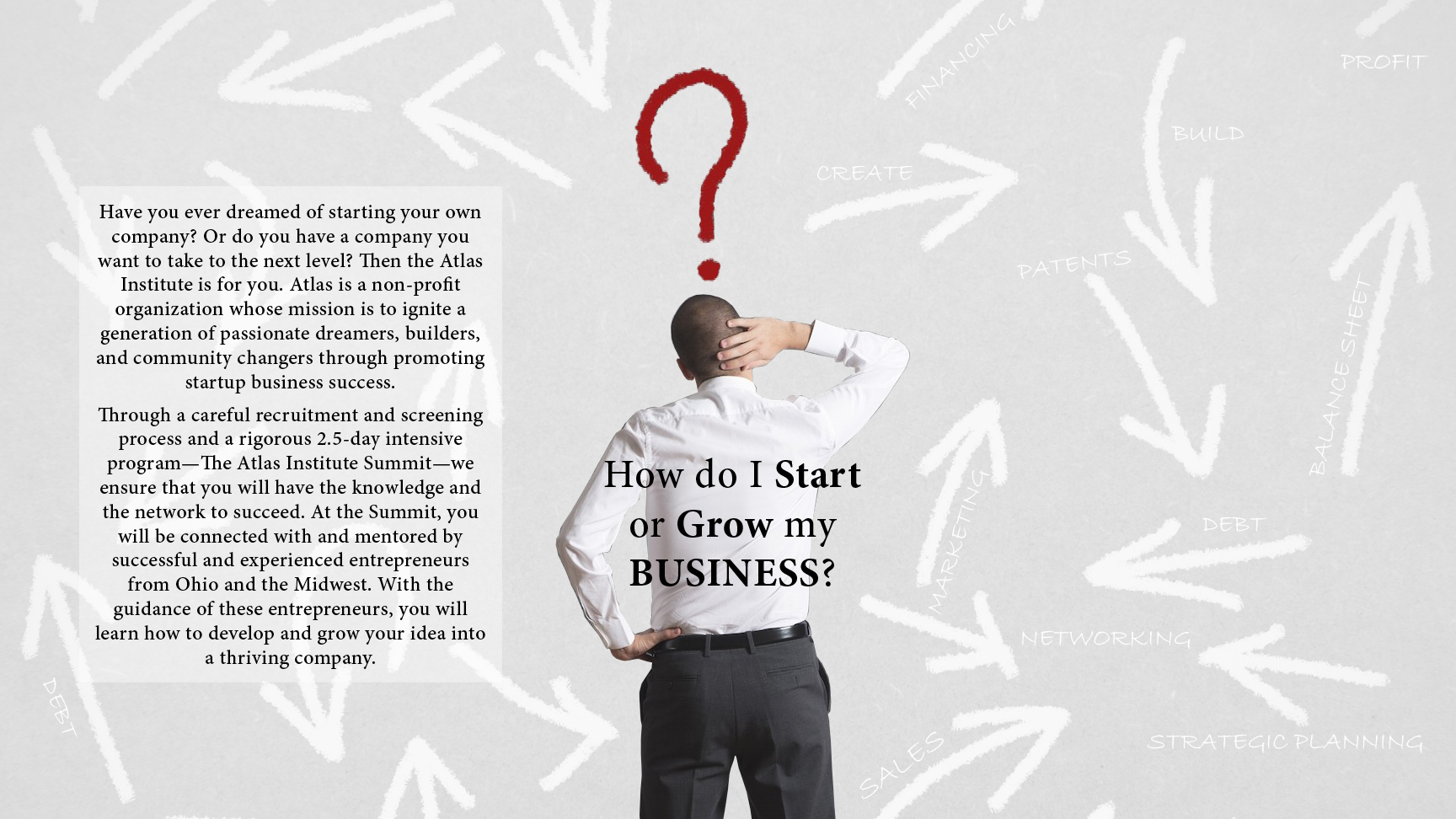 Is my idea a good one?

How do I develop my product?

How do I find customers?

How do I create a good team?

How do I finance my businesses growth?

Find and inspire young talent to create and build the next generation of business start-ups.

By identifying and developing young entrepreneurial minded students in Midwest, the mission of Atlas is ultimately to launch new businesses. Atlas will provide students with networking opportunities by connecting them to experienced entrepreneurs dedicated to investing in the next generation.

Learn through our 2.5 day Atlas Institute Summit to grow or launch your business

The Atlas Institute Summit is designed to teach students the timeless principles, theories, and practical skills necessary to start a successful company. Our summit features an ambitious training schedule facilitated by experienced CEOs and business leaders.

Launch businesses by providing students with the right network, training, and funding.

Top students from the Atlas Summit who already have or are in the final stages of starting their own company will be invited to participate in our six-month Atlas Startup Program featuring mentorship and investment opportunity.

If you want to learn the principles of hard work there are very few places better than rural Ohio. Growing up on a farm was one of the best things that ever happened to me. It allowed me to explore, grow and build things. My first entrepreneurial endeavors happened there (livestock and farm markets), allowing me to explore, to grow and to build things in a way that would not have been possible in other environments.

As with many young people, I left the farm for college and from there moved to the big city to work in government. It didn’t last long before the call of familiar faces and the peace and quiet of country life called me back home to Darke County. Moving back, I realized there were few jobs and very little opportunity. So I decided to create my own job and to start my own company.

I spent a year trying to figure out what to do, bouncing from idea to idea. Finally I settled on advertising and marketing and started a billboard company. It was one of the most difficult things I have ever done. There were not a lot of readily available resources from which to get advice or to help me with the creation and growth of my company. We fought through it though and today are one of the fastest growing billboard companies in the Midwest.

It is my desire to ensure that the next generation of entrepreneurs have an easier path to success than I did. This is what Atlas is all about: helping to flatten out the ground the next generation will build on. My goal for Atlas is that over the next ten years Atlas will play a part in seeing 100 companies created that are doing at least a million dollars in sales each. Ambitious? Yes. Doable? Absolutely. The dreams are there, the path to reach them just needs tending. Come and join me showing the next generation how to grow and build and dream.

June 22-24 will be the first ever Atlas Summit! We are accepting twenty entrepreneurs into the program the first year and we have nine spots left. Spots are filled as we get qualified applicants. Apply quickly.